This is an archived version of the Z3Py tutorial by Leonardo de Moura. It was resurected from StackOverflow. Syntax highlighting by Sorig.

Z3 is a high performance theorem prover developed at Microsoft Research. Z3 is used in many applications such as: software/hardware verification and testing, constraint solving, analysis of hybrid systems, security, biology (in silico analysis), and geometrical problems.

This tutorial demonstrates the main capabilities of Z3Py: the Z3 API in Python. No Python background is needed to read this tutorial. However, it is useful to learn Python (a fun language!) at some point, and there are many excellent free resources for doing so (Python Tutorial).

Be sure to follow along with the examples by clicking the load in editor link in the corner. See what Z3Py says, try your own scripts, and experiment!

Please send feedback, comments and/or corrections to leonardo@microsoft.com. Your comments are very valuable.

Let us start with the following simple example:

The function Int('x') creates an integer variable in Z3 named x. The solve function solves a system of constraints. The example above uses two variables x and y, and three constraints. Z3Py like Python uses = for assignment. The operators <, <=, >, >=, == and != for comparison. In the example above, the expression x + 2*y == 7 is a Z3 constraint. Z3 can solve and crunch formulas.

The next examples show how to use the Z3 formula/expression simplifier.

The procedure set_option is used to configure the Z3 environment. It is used to set global configuration options such as how the result is displayed. The option set_option(precision=30) sets the number of decimal places used when displaying results. The ? mark in 1.2599210498? indicates the output is truncated.

Rational numbers can also be displayed in decimal notation.

A system of constraints may not have a solution. In this case, we say the system is unsatisfiable.

Like in Python, comments begin with the hash character # and are terminated by the end of line. Z3Py does not support comments that span more than one line.

Z3 supports Boolean operators: And, Or, Not, Implies (implication), If (if-then-else). Bi-implications are represented using equality ==. The following example shows how to solve a simple set of Boolean constraints.

The Python Boolean constants True and False can be used to build Z3 Boolean expressions.

The following example uses a combination of polynomial and Boolean constraints.

Z3 provides different solvers. The command solve, used in the previous examples, is implemented using the Z3 solver API. The implementation can be found in the file z3.py in the Z3 distribution. The following example demonstrates the basic Solver API.

In some applications, we want to explore several similar problems that share several constraints. We can use the commands push and pop for doing that. Each solver maintains a stack of assertions. The command push creates a new scope by saving the current stack size. The command pop removes any assertion performed between it and the matching push. The check method always operates on the content of solver assertion stack.

The following example shows an example that Z3 cannot solve. The solver returns unknown in this case. Recall that Z3 can solve nonlinear polynomial constraints, but 2**x is not a polynomial.

The following example shows how to traverse the constraints asserted into a solver, and how to collect performance statistics for the check method.

In the example above, the function Reals('x y z') creates the variables. x, y and z. It is shorthand for:

The expression m[x] returns the interpretation of x in the model m. The expression "%s = %s" % (d.name(), m[d]) returns a string where the first %s is replaced with the name of d (i.e., d.name()), and the second %s with a textual representation of the interpretation of d (i.e., m[d]). Z3Py automatically converts Z3 objects into a textual representation when needed.

Z3 supports real and integer variables. They can be mixed in a single problem. Like most programming languages, Z3Py will automatically add coercions converting integer expressions to real ones when needed. The following example demonstrates different ways to declare integer and real variables.

The function ToReal casts an integer expression into a real expression.

The command help_simplify() prints all available options. Z3Py allows users to write option in two styles. The Z3 internal option names start with : and words are separated by -. These options can be used in Z3Py. Z3Py also supports Python-like names, where : is suppressed and - is replaced with _. The following example demonstrates how to use both styles.

Modern CPUs and main-stream programming languages use arithmetic over fixed-size bit-vectors. Machine arithmetic is available in Z3Py as Bit-Vectors. They implement the precise semantics of unsigned and of signed two-complements arithmetic.

In contrast to programming languages, such as C, C++, C#, Java, there is no distinction between signed and unsigned bit-vectors as numbers. Instead, Z3 provides special signed versions of arithmetical operations where it makes a difference whether the bit-vector is treated as signed or unsigned. In Z3Py, the operators <, <=, >, >=, /, % and >> correspond to the signed versions. The corresponding unsigned operators are ULT, ULE, UGT, UGE, UDiv, URem and LShR.

Unlike programming languages, where functions have side-effects, can throw exceptions, or never return, functions in Z3 have no side-effects and are total. That is, they are defined on all input values. This includes functions, such as division. Z3 is based on first-order logic.

Given a constraints such as x + y > 3, we have been saying that x and y are variables. In many textbooks, x and y are called uninterpreted constants. That is, they allow any interpretation that is consistent with the constraint x + y > 3.

In Z3, we can also evaluate expressions in the model for a system of constraints. The following example shows how to use the evaluate method.

A formula/constraint F is valid if F always evaluates to true for any assignment of appropriate values to its uninterpreted symbols. A formula/constraint F is satisfiable if there is some assignment of appropriate values to its uninterpreted symbols under which F evaluates to true. Validity is about finding a proof of a statement; satisfiability is about finding a solution to a set of constraints. Consider a formula F containing a and b. We can ask whether F is valid, that is whether it is always true for any combination of values for a and b. If F is always true, then Not(F) is always false, and then Not(F) will not have any satisfying assignment (i.e., solution); that is, Not(F) is unsatisfiable. That is, F is valid precisely when Not(F) is not satisfiable (is unsatisfiable). Alternately, F is satisfiable if and only if Not(F) is not valid (is invalid). The following example proves the deMorgan's law.

In the example above, the expression "x%s" % i returns a string where %s is replaced with the value of i.

The command pp is similar to print, but it uses Z3Py formatter for lists and tuples instead of Python's formatter.

In high school, students learn the kinematic equations. These equations describe the mathematical relationship between displacement (d), time (t), acceleration (a), initial velocity (v_i) and final velocity (v_f). In Z3Py notation, we can write these equations as:

Ima Hurryin is approaching a stoplight moving with a velocity of 30.0 m/s. The light turns yellow, and Ima applies the brakes and skids to a stop. If Ima's acceleration is -8.00 m/s2, then determine the displacement of the car during the skidding process.

Ben Rushin is waiting at a stoplight. When it finally turns green, Ben accelerated from rest at a rate of a 6.00 m/s2 for a time of 4.10 seconds. Determine the displacement of Ben's car during this time period.

Some low level hacks are very popular with C programmers. We use some of these hacks in the Z3 implementation.

The following simple hack can be used to test whether two machine integers have opposite signs.

Consider the following puzzle. Spend exactly 100 dollars and buy exactly 100 animals. Dogs cost 15 dollars, cats cost 1 dollar, and mice cost 25 cents each. You have to buy at least one of each. How many of each should you buy?

Sudoku is a very popular puzzle. The goal is to insert the numbers in the boxes to satisfy only one condition: each row, column and 3x3 box must contain the digits 1 through 9 exactly once. 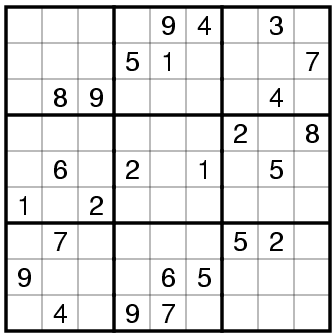 The following example encodes the suduko problem in Z3. Different sukudo instances can be solved by modifying the matrix instance. This example makes heavy use of list comprehensions available in the Python programming language. 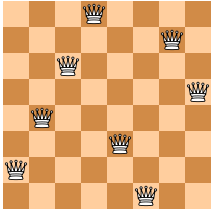 The install problem can be easily solved using Z3. The idea is to define a Boolean variable for each package. This variable is true if the package must be in the system. If package a depends on packages b, c and z, we write:

DependsOn is a simple Python function that creates Z3 constraints that capture the depends clause semantics.

Conflict(d, e) generates the constraint Or(Not(d), Not(e)). With these two functions, we can easily encode the example in the Opium article (Section 2) in Z3Py as:

Note that the example contains the constraint

The meaning is: to install c, we must install d or e, and f or g

Now, we refine the previous example. First, we modify DependsOn to allow us to write DependsOn(b, d) instead of DependsOn(b, [d]). We also write a function install_check that returns a list of packages that must be installed in the system. The function Conflict is also modified. It can now receive multiple arguments.

Z3Py is part of the Z3 distribution. It is located in the python subdirectory. To use it locally, you have to include the following command in your Python script.

The Z3 Python frontend directory must be in your PYTHONPATH environment variable. Z3Py will automatically search for the Z3 library (z3.dll (Windows), libz3.so (Linux), or libz3.dylib (OSX)). You may also initialize Z3Py manually using the command: